NEXT
The Enola Gay & Hiroshima 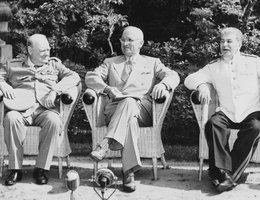 The Enola Gay certainly became World War II’s most famous airplane when it dropped the world’s first atomic bomb on Hiroshima August 6, 1945. It was built in Omaha. The B-29 Superfortress bomber was the single most complicated and expensive airplane produced by the United States during World War II.

The Enola Gay was specially modified for its mission and was handpicked from the assembly line in Omaha by the pilot of the atomic bomb mission, Col. Paul Tibbets. He named the plane after his mother.

"I looked upon this airplane as one of the best B-29s ever produced. I remember picking it out of the production line at the Martin factory in Omaha with the help of a couple of foremen."
— Colonel Paul Tibbets, Jr.

The decision to drop the bomb was difficult for the new President Harry S. Truman. That single blast was equal to 20,000 tons of TNT. The force of the blast could shorten the war and reduce the number of American and Japanese casualties. But that single blast could also kill hundreds of thousands Japanese civilians. Truman decided to go ahead. Col. Tibbets and the crew of Enola Gay dropped the first bomb — codenamed "Little Boy" — on Hiroshima on August 6, 1945. On the ground, 80,000 people died immediately. When the second atomic bomb was dropped on Nagasaki three days later, 70,000 died. 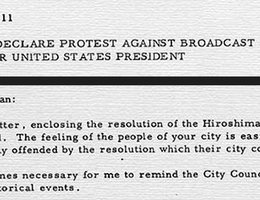 Excerpt from announcing the dropping of the atomic bomb. Notice a space has been left for the name of the city.

"I thought at the time and I still do, that we saved an awful lot of lives. American and Japanese both. The Japanese were never going to give up unless we had something like that. We would have had to kill off all the Japanese, and there would have been a lot of Americans killed in the meantime... My conscience never hurt me any. I think we saved thousands and thousands of lives." — Vince Ortman.

World War II was the largest human-made catastrophe in history, affecting almost every country in the world and touching the lives of every family in the United States. War affects governments and groups of people on such a large scale that it can be overwhelming. However, each event is experienced one person at a time, and each person has an individual story to tell.

The debate over how the war was won has continued.

Some World War II Medal of Honor recipients are in the Nebraska Hall of Fame.

Learn more about all its members.

NEXT
The Enola Gay & Hiroshima