PREVIOUS
Work Details Away from the Camp

NEXT
Nebraska Helps Win the War 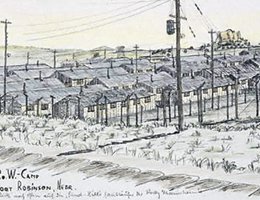 The first groups of German POWs to arrive in Nebraska were well-disciplined, regular soldiers. Many were fanatical Nazis, and that was a source of conflict in the camps. These Nazis were more thoroughly indoctrinated in Nazi ideology than most later-arriving POWs.

Initially, Americans had little interest in the politics of the German POWs. Most Americans were politically ignorant or naïve about Nazism. This naïvete is illustrated by a conversation between Fort Robinson commander, Colonel Arthur Blaine, and his interpreter, John Neumaier:

– "Corporal, I tell you these Bolsheviks in that camp, they really have discipline."

– "Colonel, sir, these are not Bolsheviks. These are Nazis."

The stage was set for internal strife that the American command at first chose to ignore. Although ardent Nazis were a minority in the POW camps, they controlled the camps, intimidating others by threats and violence. A second factor was the failure to segregate anti-Nazis and Nazi prisoners during the initial processing. It was assumed that every German soldier was a Nazi. Nazi harassment served to bring uncooperative prisoners into line or drive them to other camps.

Unfortunately, the general aim of the American command was to maintain tranquility. As long as the POWs behaved correctly and maintained good discipline, the camp commanders were happy. Nazi-dominated camps were models of efficiency. Nazis leaders soon learned that a well-run camp earned them the backing of the American command. But a well-run camp could also be a vicious camp.

Gen. George Marshall ordered the development of a POW re-education programs. POWs were to be exposed to the facts of American history, the workings of democracy, and the contributions made to America by peoples of all national origins.

It is difficult to judge the success of the re-education programs, but it appears Fort Robinson enjoyed more success in implementing the programs than most POW camps. Most POWs interned at Fort Robinson expressed gratitude for the opportunity to learn new ideas and beliefs when not under the restraints of Nazi ideology.

PREVIOUS
Work Details Away from the Camp

NEXT
Nebraska Helps Win the War