NEXT
Front Lines & the Home Front 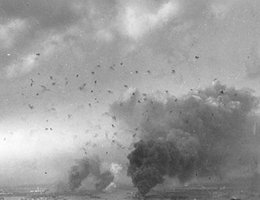 There was already a war going on in Europe. After Germany invaded the former Soviet Union in June 1941, the United States joined Great Britain, China, the Soviet Union, and several others to become the Allied Powers. We promised aid to the Soviet Union to resist Germany.

Germany was part of the enemy we called the Axis Powers, along with Italy, and later Japan. Together, they signed the Tripartite Pact in 1940, although they mostly fought independent of each other.

On December 7th, 1941, Japanese warplanes attacked the U.S. Navy base at Pearl Harbor, Hawaii. On just one of the American ships, the battleship U.S.S. Arizona, 22 Nebraskans died. This was the beginning of World War II for Nebraskans, as well as the rest of the nation. Most listened closely to the radio when President Franklin D. Roosevelt (FDR) told Congress the December 7th attack on Pearl Harbor was "...a date that will live in infamy."

The attack on Pearl Harbor was such a life-altering event that Nebraskans carried vivid memories of when they heard about it.
From the 1980 NET Television program Legacies of World War II on the Great Plains

Most Americans have clear memories of exactly where they were when they heard the news.

"Even though I was only seven and a half years old, I remember December 7, 1941, as if it was yesterday. It was on a Sunday afternoon when we heard on the radio that Pearl Harbor had been bombed. It seemed our lives changed right then."

— Betty Safarik Spilger, who was a Farwell grade school student in 1941.

"I remember we were playing sandlot football when the young ladies who were sitting in their car listening to the radio came to tell us that the Japanese had bombed Pearl Harbor. To be very honest about it, at the time, I think most of us kind of wondered where Pearl Harbor was."
— Paul Thompson, Cozad student

After the attack on Pearl Harbor, the U.S. joined in combat both to the east and to the west, making the war officially spread around the world. 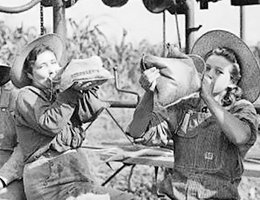 The Japanese attack on Pearl Harbor changed the lives of all Nebraskans. They joined in a common goal of winning the war no matter what they had to do. The attack motivated many young men to join and fight on the front lines. But, most Nebraskans did not serve in the armed forces. However, life was very challenging, and they did their part to help win the war.

Nebraskans helped to win the war by raising animals and growing crops to help feed the American soldiers and their allies too. Fortunately, rain and an improved economy came to Nebraska farmers after years of drought and a poor economy. Other Nebraska men and women left the farms and got higher paying jobs working in factories making war materials.

The Nebraska Farmer magazine expressed the sentiment of many in a poem in their August 4, 1945 issue.

Because many of Nebraska’s young men had left farms to join the military, there was a labor shortage in rural areas. Thus, many women helped on the farms.

"I think it [my reaction] was, number one, surprise;number two, I don’t think most people [had] even heard of Pearl Harbor; and three, I felt that the Japanese were kind of stupid for even attacking a great, powerful nation like ours, because we put Japan down as a nothing, a tin toy deal... On the day before, I think if you had taken a vote among the people, nobody would have wanted to go to war. As soon as we heard about it people were ready to rush down and enlist the next morning."
— Floyd Marian, Hastings High School student, later
U.S. Army Air Forces C-47 pilot, European Theater.

Some World War II Medal of Honor recipients are in the Nebraska Hall of Fame.
Learn more about all its members.

NEXT
Front Lines & the Home Front