Land Grants and the Decline of the Railroads 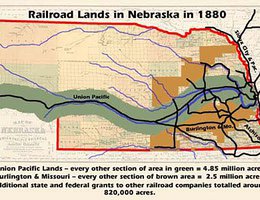 At the same time that homesteaders were getting free land from the government, large tracts of land were granted to railroads by both the states and the federal government. The goal was to encourage the railroads to build their tracks where few people lived, and to help settle the country. The federal government was especially interested in creating a transportation system that would link the eastern and western coasts. Not only would a transcontinental railroad help populate the Great Plains, but it would tie the country together and also provide links to the potentially rich Asian trade. 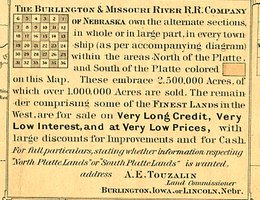 Approximately 16 percent of Nebraska’s total land mass was given to various railroad companies, either by the federal government or by the state. Along the lines of the state’s two major railroads, the Union Pacific and the Burlington, every other square mile of land (called a "section") went to the railroads. This checkerboard of land extended back twenty miles on both sides of the track. So, the railroads owned a total of twenty sections of land for each mile of road constructed.

Thousands of pioneers traveled to and through Nebraska in covered wagons. But after the first railroad was completed across the state in 1867, thousands more took the train to Nebraska. When the transcontinental railroad was completed in 1869, people could travel from coast to coast quite comfortably. The Oregon Trail was gradually abandoned. Railroads encouraged settlers to move to Nebraska and had a tremendous impact on settlement. 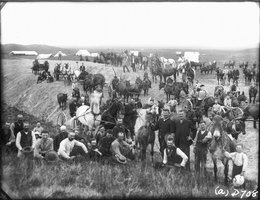 Why Buy Land When It’s Free?

Through the settlement years, there were four major laws that made land available to settlers for free — the Preemption Act of 1841, the Homestead Act of 1862 , the Timber Culture Act of 1873, and the Kinkaid Act of 1904. Some settlers paid $15 in filing fees for a homestead with free land. But, other settlers bought and paid for land from the railroads that were charging around $800 for 160-acre farm. Why did they do that when they could have had land for free? 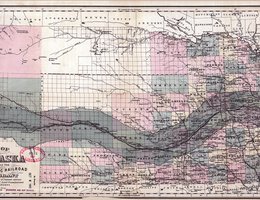 For one thing, the railroads had more to gain, so they advertised. Once the railroads had located and patented their land, they were very anxious to sell the land beside the tracks as quickly and profitably as possible. They wanted paying customers who would ship goods to markets and buy things from those markets. The closer a farmer was to the railroad, the easier it was to ship crops and livestock to market. Land agents were hired by the railroads and sent to major cities in the East and to most northern and central European countries. They flooded those places with advertisements about the valuable land in the West and especially in Nebraska. If you were interested, the railroad would put you on a special land-seeking train. If you decided to buy, the price of the train ticket would be applied to the price of the land. 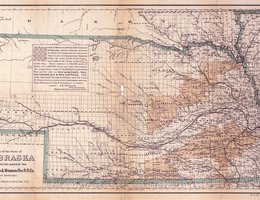 Together, the Burlington and Union Pacific Railroads had sold more than 7 million acres to private purchasers. Over 9.6 million acres was obtained free of charge under the Homestead Act. The railroads did not abandon settlers after they sold them the land. They supported agricultural improvement programs that would help make farmers more successful. This would create more need for their transportation services. The more the farmers succeeded, the more the railroads succeeded. And as the railroads grew, they played a huge role in the politics, economy and history of Nebraska. 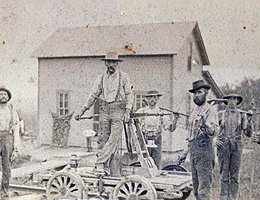 The railroads played a key role in the settlement of Nebraska. More than 11 railroads in Nebraska received money or free land from both the federal and state governments. Yet in 1915 there were more miles of railroad in Nebraska than there are today. What happened?

There are a variety of reasons for the dramatic change in the fortunes of the railroads. The biggest factor is that transportation technology overtook the trains. In 1915 there were no paved highways and few cars and trucks. Almost everyone traveled by train. Today most people travel by automobile or airplane. Trucks today haul much more freight than railroads. There has been a lot of consolidation of smaller railroad companies into large companies like the Union Pacific. The railroad still plays an important role in hauling coal, grain, and other freight, but it does not have the monopoly it enjoyed during the homestead era when people had no choice when it came to transporting themselves or their products.

the east coast with the west coast?

What was the effect of this transportation system on the Oregon and Mormon trails?

Why did the settlers prefer to purchase their land near the railroads?

How did the railroad promote the settlement of Nebraska?

What railroads received free land in Nebraska from the U.S. Government?

Why would the U.S. Government grant free land to the railroads?

What did railroads do with the land they did not use for railroad construction?

Why would Nebraska settlers pay for land sold by a railroad when they could obtain free land
through the Homestead Act?