NEXT
The Civil War & Texas Beef 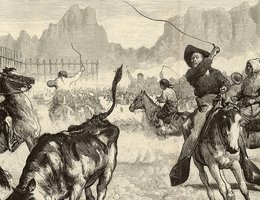 Cattle are so much a part of Nebraska life today that it may seem strange to think of a time when there were none in our area.

We think "west" when we think about beef in America, but its story is really about going north. Cattle are not native to the American continents. The Spanish brought them to the Americas in the 16th Century.

In Mexico, strays from Spanish herds, especially in what is now southern Texas, thrived and grew into large herds of wild animals that took care of themselves. Over almost 350 years, these animals evolved into the Texas Longhorns.

The Longhorns had a high reproductive rate, were resistant to disease, and could fight off predators. Their numbers grew into the millions by the time Texas joined the Union in 1845. These animals became the foundation of the beef empires in the American West and dramatically changed what Americans ate. 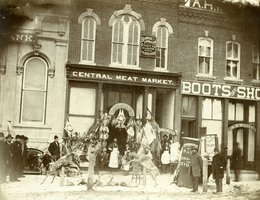 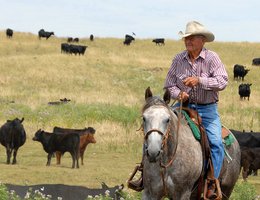 Before the Civil War, when Americans ate meat, it was mostly poultry, pork, and game. The problem was spoilage.

Poultry (like chickens and ducks) and small game (like rabbits and squirrels) could be eaten the same day they were killed. Pork and large game (like deer) could be dried, smoked, or salted, and thus preserved. But Americans never really liked dried beef, and fresh beef spoils quickly.

That changed after the Civil War. Demand for beef exploded, both in America and in Europe. Railroads moved west connecting the huge herds of cattle with the packing plants, and refrigeration allowed beef to be processed year round.

When Nebraska became a state in 1867, it quickly led in beef production. Our western regions, particularly the Sandhills, were thick with healthy grasses for grazing, plenty of water, and rich farmlands that produced abundant corn for feeding.

An exciting new era in the history of Nebraska had begun.

The video, Prologue, sets the stage for our story of beef.
From the 2008 NET Television production Beef State

NEXT
The Civil War & Texas Beef