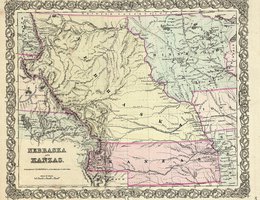 The first half of the 19th century was a time of great change on the Great Plains. It was only 1803 when President Jefferson completed the Louisiana Purchase from Napoleon — a purchase including the Great Plains region. No one knew what was in the purchase besides a lot of land and relatively few Indians. This land was not organized into a territory. In 1854, the federal government passed the Kansas-Nebraska Act, and a large area of land labeled the Nebraska Territory was open for settlement.

Not everyone was happy with the Kansas-Nebraska plan. Southerners feared it would lead to a territory filled with anti-slavery settlers. The anti-slave people worried that at least a part of the area would be filled with pro-slave settlers. It opened up the territory to "popular sovereignty," the belief that the people living in the territory should decide for themselves.

Where is the Nebraska Territory? 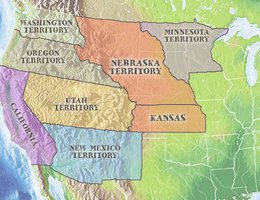 The Kansas-Nebraska Act created a territory that stretched all the way north from the southern boundary of present-day Nebraska to include all of the remaining lands of the Louisiana Purchase. Over the years, changes were made that left the territory in roughly the same shape and with roughly the same boundaries as Nebraska has today.

But even this final territory was almost torn into two parts as a conflict developed between the settlers living north of the Platte and those living south of the Platte. The issue that angered the people was the location of the territorial capital and the political power that would go with it. The area south of the Platte River, which had more people, wanted the capital to be located south of the river. They bitterly complained about the choice of Omaha City (north of the Platte) as the first capital. A South Platte convention was held at Brownville in 1859, and a formal request was sent to Congress asking them to allow the South Platte area to be annexed by Kansas. They argued that the soil and climate in Kansas and the South Platte area of Nebraska were similar, and that the Platte River was impassable and formed a natural boundary between Nebraska and Kansas. Eventually a compromise made Lincoln the new capital and reunited the state.

Did Native Americans live in Nebraska during this time period?

How were their lives influenced by the Kansas-Nebraska Act?

How did the Missouri Compromise and the Kansas-Nebraska Acts affect the settlement of the Nebraska area?

What was a prominent issue in each act?