NEXT
The Challenges of the Plains

Imagine yourself as a young person in a place where the land has all been taken. You might want to become a farmer, but there is no farmland available. Then imagine seeing advertisements for land, some for very little money, some for free! You face many unknowns. What is this new land really like? Will there be enough rainfall to grow your crops? Will you have neighbors? Who will they be? What about the people who are already on the land? 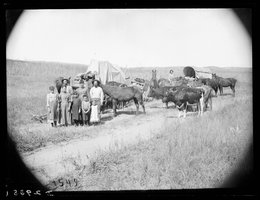 Dr. Robert Munkres explains how life and death on the wagon train was quite a bit different in reality than in fiction. From the 1981 NET Television program Hidden Places 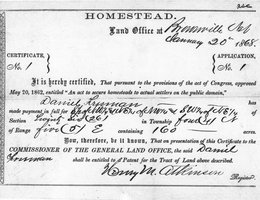 How did all this land become available? In the 1830s the federal government had said this area was Indian country — a place where Native Americans could live as independent nations. But with passage of the Kansas-Nebraska Act of 1854, the government went back on that promise and opened the land to settlement. Newcomers came slowly and began to gradually create farms, towns, and industries.

To encourage this settlement throughout the West, the U.S. Congress passed the Homestead Act and President Lincoln pushed for the building of a railroad across the country. The Homestead Act of 1862 gave 160 acres of public land to any head of household who lived on the land five years.The railroads were given huge tracts of land to encourage construction. They offered this land for sale to immigrants at low cost.

Thousands of settlers, many with families, did move to the Nebraska Territory from the eastern regions of the United States. Smaller numbers came from foreign nations. These settlers traveled westward across the country onto the Great Plains and played a key role in the settlement of Nebraska. Federal land policies set in motion great changes in the physical and cultural landscape.

NEXT
The Challenges of the Plains