NEXT
The Army Restores Order 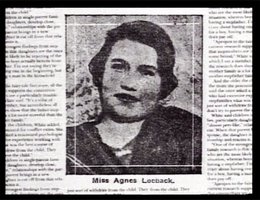 From May through September 1919, over 25 race riots rocked cities from Texas to Illinois, Nebraska to Georgia. In Omaha, the trouble began on September 25, when a white woman, Agnes Loebeck, reported that she was assaulted by a black man.

The next morning, the Bee reached new lows reporting the event. The headline was: "Black Beast First Stick-up Couple."

"The most daring attack on a white woman ever perpetrated in Omaha occurred one block south of Bancroft street near Scenic Avenue in Gibson last night."

Coverage in the World-Herald was slightly less inflammatory:

"Pretty little Agnes Loebeck . . . was assaulted . . . by an unidentified negro at twelve O’clock last night, while she was returning to her home in company with Millard [sic] Hoffman, a cripple." 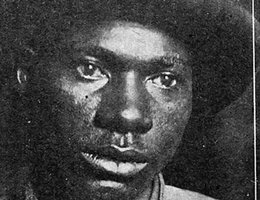 Will Brown from the "World-Herald", 1919
Courtesy Nebraska State Historical Society

That evening, the police took a suspect to the Loebeck home. Agnes and her boyfriend Milton Hoffman (they were later married) identified a black packinghouse worker named Will Brown as the assailant. Brown was 41 years old and suffered from acute rheumatism.

Before the police could leave the Loebeck house, a mob gathered outside and threatened to seize Brown. After an hour’s confrontation, police reinforcements arrived and Brown was transferred to the Douglas County Courthouse. Several police officers were ordered to report at once to police headquarters in case of further trouble, and 46 policemen and a detective were kept on duty well into the night.

After the confrontation outside the Loebeck home, rumors began to fly that a mob would try to seize Brown again. On Sunday, September 28, a group of youths gathered in south Omaha and began a march to the Douglas County courthouse. Eventually, thousands of angry people gathered at the courthouse and by evening, the Omaha police and city officials inside the courthouse were virtual prisoners. The size of the crowd was estimated as between 5,000 and 15,000 people. By 8:00 p.m. the mob had begun firing on the courthouse with guns they looted from nearby stores. In that exchange of gunfire, one 16-year-old leader of the mob, and a 34-year-old businessman a block away were killed. By 8:30 the mob had set fire to the building and prevented fire fighters from extinguishing the flames. Inside, Will Brown moaned to Sheriff Mike Clark, "I am innocent, I never did it, my God I am innocent." 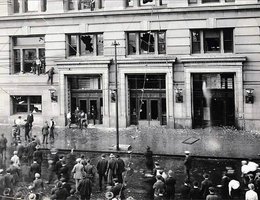 Mayor Smith had been at the scene for several hours. He came out of the courthouse and tried to reason with the mob. He asked them to forget the prisoner and allow the firemen to put out the flames. At that point, the mayor was knocked down by a blow to his head, and the next thing he knew, he was on Harney Street. One end of a rope was being flung over a lamp post. The other end tightened around his neck. That was the last thing he remembered until he woke up in a hospital where he remained for several days in serious condition with severe head injuries.

Mayor Smith had been rescued, but there are several versions of how the rescue happened. Some reports say police detectives were responsible for saving Smith’s life. Others give the credit to a young man named Russell Norgaard. Whatever the true story, the mob lost interest in Smith and concentrated on getting Brown out of the courthouse. 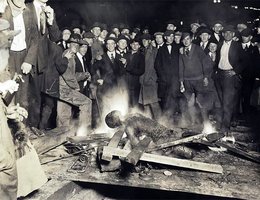 Some of the crowd grinned while watching the burning of Will Brown’s body; Omaha, Nebraska, Sept. 28, 1919
Courtesy Nebraska State Historical Society, RG2281-69

The lynching of Will Brown was a horrible event that affected all parts of the city.
From the 1994 NET Television program A Street of Dreams

Brown ended up in the hands of the crazed mob. He was beaten into unconsciousness. His clothes were torn off by the time he reached the building’s doors. Then he was dragged to a nearby lamp pole on the south side of the courthouse at 18th and Harney around 11:00 p.m. The mob roared when they saw Brown, and a rope was placed around his neck. Brown was hoisted in the air, his body spinning. He was riddled with bullets. His body was then brought down, tied behind a car, and towed to the intersection of 17th and Dodge. There the body was burned with fuel taken from nearby red danger lamps and fire truck lanterns. Later, pieces of the rope used to lynch Brown were sold for 10 cents each. Finally, Brown’s charred body was dragged through the city’s downtown streets.

Nebraska-born actor Henry Fonda was 14 years old when the lynching happened. His father owned a printing plant across the street from the courthouse. He watched the riot from the second floor window of his father’s shop.

"It was the most horrendous sight I’d ever seen . . . We locked the plant, went downstairs, and drove home in silence. My hands were wet and there were tears in my eyes. All I could think of was that young black man dangling at the end of a rope."

NEXT
The Army Restores Order