Racial Tensions in Nebraska after World War I

On November 11, 1918, World War I ended and America emerged victorious. But as thousands of soldiers returned from Europe ready to forget the terrible carnage they had seen, they arrived in a country with serious social and political problems that the war had simply swept under the surface. 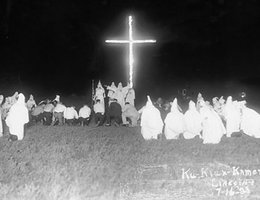 There have always been racial divides in America. People tend to identify themselves as members of one group or another. Tensions come to the surface when one group begins to believe that another group is different from theirs and when new groups threaten the established group’s livelihood or way of life. That was true in 1909 when established European groups in Omaha began to believe that new groups of workers from Greece were a threat. Large numbers of Greeks were moving to Omaha in the early part of the century to work in the packing houses and on the railroads. They settled into South Omaha, which was a separate city at that time. Pretty soon, there were stories in the mainline newspapers about how unsavory the Greeks were.

"Their quarters have been unsanitary; they have insulted women. . . Herded together in lodging houses and living cheaply, Greeks are a menace to the American laboring man — just as the Japs, Italians, and other similar laborers are."

In 1909, an Irish South Omaha police officer was killed trying to arrest a Greek man. The Greek was arrested, but a mob formed around the jail. The suspect was almost lynched as police transferred him to an Omaha jail. The papers kept printing sensational stories. Two days later, 1,000 men gathered in South Omaha and stormed "Greek Town," looting shops, burning buildings, and beating any Greeks they found. The police and authorities did not respond. In the wake of the riot, almost all of the Greeks living in Omaha moved, either to Iowa or further away. 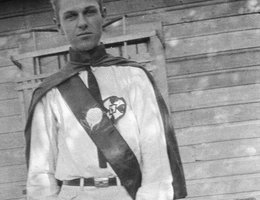 After World War I, Nebraska (like other states) was experiencing the problems of peacetime readjustment. This was especially true with problems between blacks and whites. Before the war, racial tensions were serious but were most visible in the South. During the war, black citizens began a mass migration to the North, taking jobs that soldiers had left. When the soldiers returned, tensions increased nationwide. Nebraska, and especially Omaha, was no exception. Although racial clashes had taken place here in the past, they were very limited in scope. Now, the tensions boiled to the surface.

We can see some indication of the tension in the air in the activities of the KKK. After the war, the hate group, the Ku Klux Klan, launched major membership drives across the Midwest. The first Nebraska Klavern was founded in Omaha in 1921. By the end of the year, there were around 24 chapters in the state with an estimated membership of 1,100. By 1923, the Atlanta headquarters of the KKK claimed 45,000 members in the state. The Lincoln Star reported that the Klan was "active in Lincoln, Omaha, Fremont, York, Grand Island, Hastings, North Platte and Scottsbluff". 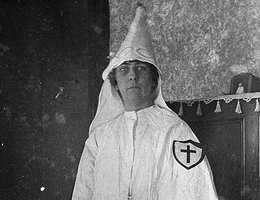 The summer of 1919 was a time of restless transition, and Omaha was one of the flash points. Violence was just under the surface.