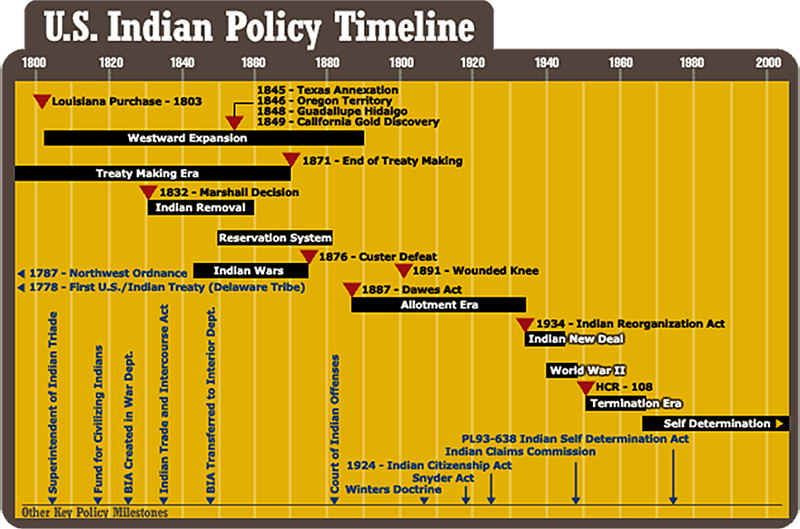 Key Dates in the History of Relations between the United States and Native American Tribes.
NET Learning Service

It is easy for most of us to become a citizen of the United States. For most U.S. citizens, the simple fact that we were born within the country’s borders makes us citizens. We become citizens at birth. But it was not until well into the 20th Century that a large group of Native-born people were given citizenship. The road to citizenship for Native people was even longer than for African Americans and women. Native Americans did not become citizens until 1924, and it would be even longer before Native Americans gained the right to vote.

How did Native Americans finally acquire citizenship? Was it by Congressional law, a Constitutional amendment, Presidential decree, or a Supreme Court decision? There is no one answer. There was a patchwork of approaches before Congress finally tried to fashion an answer for all Native peoples.

I have listened to many talks from our Great Father. When he first came over the wide waters, he was but a little man. . . . His legs were cramped by sitting long in his big boat, and he begged for a little land to light his fire.

But when the white man had warmed himself before the Indians’ fire and filled himself wit their hominy, he became very large. With a step, he bestrode the mountains, and his feet covered the plains and the valleys. His hand grasped the eastern and western seas and his head rested on the moon.

The full meaning of citizenship was debated early in the 20th century. Women weren’t allowed to participate fully in our democracy with the right to vote until 1920. African Americans were given citizenship after the Civil War, but discrimination and racial tensions prevented them from voting until well into the new century. The struggles of women and African Americans point out that citizenship does not automatically ensure voting rights.

For Native Americans, the journey on the road to citizenship by was marked by travels through a maze of U.S. Federal Indian policies. They left the Indian nations exhausted and nearly extinct by the time they were given citizenship. And it was another 20 years before they had the right to vote throughout the U.S.