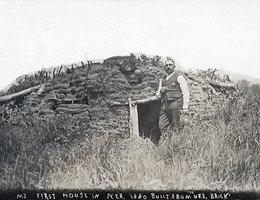 Solomon Butcher in front of his dugout. He wrote on the photo, "My first house in Neb. 1880. Built from ‘Neb. Brick’."
Courtesy Nebraska State Historical Society, RG2608-5169

In 1886 — more than 20 years after the Homestead Act was signed — an itinerate photographer in Custer County, Nebraska set out to produce a photographic history of his county. Over the next 15 years, Solomon D. Butcher produced 1,500 images, hundreds of stories, and a remarkable record of a remarkable time in the history of Nebraska and the U.S.

When Butcher was 24 years old in 1880, he had homesteaded with his father and younger brother in central Nebraska. Like many early settlers, they built a dugout, a one-room house out of sod. But Butcher discovered he wasn’t cut out to be a farmer. He went back to Minnesota, studied medicine, and married a nurse from the hospital, but never became a doctor. Instead, he and his wife Lillie came back to Nebraska. He taught school for a time and then fell back on his high school training in photography. He opened a photographic gallery in northern Custer County, a gallery that was never really profitable.

Somehow, Butcher hit on an amazing idea — he would produce a photographic history of Custer County. He must have realized that he was living in a time and place that were important to the history of the country. There is also evidence that he thought this was an idea he could sell. For whatever reason, it was an idea that seized him.

"From the time I thought of the plan, for seven days and seven nights it drove the sleep from my eyes. I laid out plans and covered sheet after sheet of paper, only to tear them up and consign them to the waste basket. At last, Eureka! Eureka! I had fount (sic) it. I was so elated that I had lost all desire for rest. . . ."

Beginning in 1886, Butcher began to travel all across the county by horse and wagon, taking photographs of his friends and neighbors. These are the photographs that now illustrate many history texts about the settlement period (and that illustrate this website). He also collected pioneer stories. As he traveled, he supported himself with subscriptions and donations that various citizens made to the project as well as by the sale of photographs. Over the next seven years, he made over 1,500 images in Custer County. 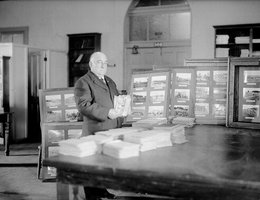 S. D. Butcher working at his collection at the University of Nebraska, 1916
Courtesy Library of Congress, 14561v

Pulling together all of his work into a book was difficult. The drought and depression of the 1890s dried up his finances. A fire in 1899 burned many of the biographies and narratives he had collected, as well as many of his slim financial assets. Finally, in 1901, he received the backing of a wealthy Custer County rancher and created the book

Pioneer History of Custer County and Short Sketches of Early Days in Nebraska.

Butcher continued to photograph, and by 1911, the sheer size and weight of all of those glass plate negatives — each 6½ by 8½ inches — was too great for him to continue to maintain and move. So he offered to sell the collection to the Nebraska State Historical Society. It took three years to get the funds from the Legislature, but the collection is now one of the major sources of primary material of history — documents made and collected during the period of history itself.