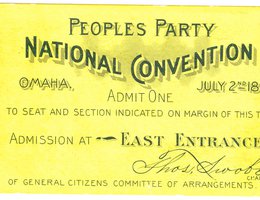 The beginnings of the Progressive Movement in the 20th Century can be found in the 1870s, ’80s, and ’90s. Even as new settlers were still moving into the state, others were beginning to organize around political and social issues.

Whether women should be allowed to vote became a big issue during the last part of the 1800s. In 1871, voters — who, of course, were all men at the time — were asked if they approved of giving women the right to vote as part of a new constitution for the state. Only 22% said yes, but the suffragettes (women who wanted the right to vote) kept organizing. A newspaper in Hebron, the Hebron Journal, was owned by a strong supporter of suffrage, Erasmus Correll and his wife, Lucy. They wrote regular columns supporting feminist (women’s) causes, and brought the founding mothers of feminism to speak in Hebron in 1877 and 1879.

Other reformers saw alcohol and the saloons as the root of much that was evil in society. Many believed that drinking caused many men to lose their jobs, leave their families and turn to a life of crime. As early as 1886, a political party, the Prohibition Party, was organized in Nebraska and nominated candidates for governor and other statewide offices. Their candidate only got 4.5 percent of the vote, but they continued to organize and agitate.

There was a lot of discontent among farmers and ranchers as well. Periods of drought made growing good crops hard. Prices for agricultural products would dip below what it cost farmers to produce them. Shipping crops and livestock to market on the railroads was expensive. And, even if the land was free through the Homestead Act, farmers and ranchers had to borrow a lot of money to buy their seed, machinery, windmills and buildings.