PREVIOUS
What Does It Mean? 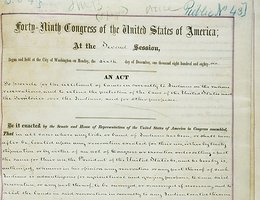 Congressman Henry Dawes of Massachusetts sponsored a historic piece of legislation, the General Allotment Act (The Dawes Severalty Act) in 1887. Its purpose was to encourage the breakup of the tribes and for Indians to blend in with American society. It would be the major Indian policy until the 1930s. Dawes’ goal was to create independent farmers out of Indians — give them land and the tools for citizenship.

While Senator Dawes may have meant well, the results were not good for the Indians. The law said that each head of an Indian family would get 160 acres of farmland or 320 acres of grazing land. The remaining tribal lands were to be declared "surplus" and opened up for whites. The tribes were supposed to simply disappear. Before the Dawes Act, Indians held about 150 million acres of land. Within twenty years, two-thirds of their land was gone. Indians received very little payment for the land they gave up. They were not used to managing money so they quickly spent the money they received. The reservation system was nearly destroyed.

Standing Bear, Tibbles, and other who participated in the lecture to the East to gain support for the Ponca cause specifically, and the Indian cause in general, did not foresee the problems that legislation like the Dawes Act would create. Land allotted to individual Indians was soon controlled by non-Indians. Indians lost much of their land and received very inadequate payment for the land they gave up. Indians, who received compensation for giving up their land, also quickly spent the money. They were unused to managing money. Few contemporary historians would judge the allotment policy of acts like the Dawes Act, successful.

PREVIOUS
What Does It Mean?