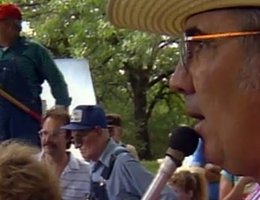 An auction can mean many different things to different people; Hank Kobza leads the bidding
From the 1990 NET Television program, After the Last Harvest

An auction in a rural community is a complex social, economic and even political event. It is also an emotional event. A farm auction usually means that the farmer is leaving — either by choice or because he or she can no longer make it financially. Neighbors gather to look through and bid on household items and equipment. In one moment, they’re looking for bargains. In another moment, they’re celebrating the life of their neighbor. They catch up on community news. They eat together. They bid. They usually buy something. But when the auction has been forced by a foreclosure, it can become a political event. Activists may try to stop it or, at least, make a point.

During the 1930s — one of the other times of major stress on the farm — activists in Nebraska came up with a way to try and halt foreclosures. A bank would announce that they had to foreclose on a farmer who couldn’t pay his or her loan. The sheriff would serve the papers and an auction would be scheduled to sell off the land and equipment that had been pledged against the loan. The bank would hope the proceeds from the sale would amount to most of the money they were losing on the loan.

But many farm activists felt that the bankers were being too greedy, and that the farmers deserved a break in tough times. So, hundreds of farmers would show up at the auction and bid ridiculously low amounts for the equipment and land on the sale. Serious bidders were discouraged, sometimes by the threat of violence. Then, the activists would turn around and give the material back to the farm family who were in trouble. The proceeds of the first of these sales were $5.35 for equipment that should have brought hundreds or thousands of dollars. In the 30s, these were known as "Penny Auctions."

Hank Kobza lost his farm and started an auction business to pay the bills.
From the 1990 NET program, After the Last Harvest

In 1984, farmers from Nebraska and surrounding states stopped a farm equipment bankruptcy auction in West Point, Nebraska. Reuben Leimer owed almost $1.8 million on his operation. He had been trying to find new financing and had even filed for bankruptcy protection. A trustee had been appointed by the bankruptcy judge, and the trustee had been gradually selling off assets to pay some of the creditors. Leimer was desperate. He tried to withdraw his filing for bankruptcy. He filed legal liens (claims) against the property being sold by the trustee. Such common-law liens are a tactic advocated by the National Agricultural Press Association and other farm organizations. He filed suit against the judge and filed "patents" against his land, trying to cloud the true ownership of the land. Leimer, his wife, and 12 children were evicted from the farm in October 1984. The court ordered a foreclosure, and the auction was scheduled for December 1984.

On the day of the sale, Leimer’s supporters crowded the auction site. Many wore black armbands in memory of Cairo farmer Arthur Kirk. When asked about the people wearing black armbands, Leimer replied they were "just people who felt they knew Art Kirk well enough to wear the bands to mourn his death." More than 50 farmers from Verdigre, Hartington, and Bloomfield in northeast Nebraska and surrounding states attended.

The auction started. The first bid was for 5 cents. The second bid was 5 cents. It only lasted about five minutes, and only one or two items were sold before the auction was called off.

Gene Chamberlain, the bankruptcy trustee appointed by the federal bankruptcy court to handle the Leimer auction, said: "The sale was canceled because of the conflicts (at the sale) which could have led to personal injury."

Cuming County Sheriff, Harold Welding also saw a potential for violence. "I think there was an intent to disrupt the sale." He said one of the farmers wearing a black armband had a handgun in a holster.

After the auction was canceled, Leimer commented that "You have more friends than you realize." Some observers reported that some of the farmers who gathered were members of the Posse Comitatus, the survivalist group. But Leimer said,

"They can give a name to anything. We don’t belong to no group. They’re just trying to discredit this. We’re law-abiding people."

Leimer, like many farmers caught up in the farm crisis of the 1980s, was convinced that there was a conspiracy of banking officials, especially federal loan institutions like the Production Credit Association, to destroy the family farm. Many farmers also thought that high-ranking federal government officials were determined to maintain cheap food prices and were willing to deny farmers a fair market price for their products to achieve that end.

The incident was reminiscent of scenes from the ’80s movie Country. In the film, neighbors of a farmer in trouble try to disrupt the machinery auction ordered by the Farmers Home Administration (FmHA). An FmHA official in the movie told the farmers the agency would simply hold the machinery sale in another location.

The Nickel Auctions were a dramatic attempt to help farmers in trouble. But they had little impact across the plains. When members of the American Agriculture Movement tried similar tactics to protest a sale near Imperial, Nebraska, in 1986, the State Patrol and Sheriff’s office were there in force. All the protestors could do was stand on the outside and bang metal garbage can lids to drown out the auctioneer. The sale went on.