NEXT
McCarthyism & his Trip to Nebraska

The 1950s and early 60s was a time of political change, and the political debate was dominated by one central fact — the communists had changed from allies during WWII to sworn enemies during the Cold War. People were afraid that communists, or "reds," would take over America and the world, especially since they also had atomic weapons. For many, the Korean War was proof that communist regimes would try to expand their territory unless the West deterred and contained them. 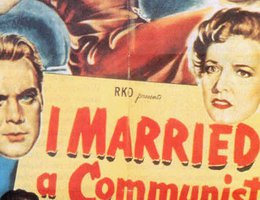 Promotional poster for "I Married a Communist", 1949; re-released in 1950 as "Woman on Pier 13"
Courtesy RKO Radio Pictures

In Congress, the two different committees, one in the House and one in the Senate, were revived to investigate the influence of communism on America. In the Senate, chairman Joseph McCarthy, claimed to have lists of names of communists in various government departments. In Hollywood, suspected communists were put on a "black list" and found themselves out of work. Across the country, families built fallout shelters in their basements and thought about the unthinkable — how someone could survive an all-out atomic war. The idea of the Red Menace was especially forceful in Nebraska because we had the headquarters for the U.S. atomic war machine on our eastern border and dozens of atomic missiles across the state.

People believed that if we weren’t careful, communists could take over all parts of America, either by military means or by subverting Americans from within. 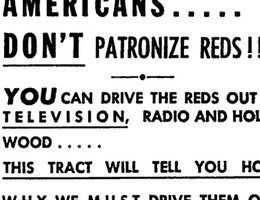 This was a big change. During the 40s, Russia was an ally fighting against Nazi Germany. During the Great Depression of the 1930s, the economy was so bad that some leaders seriously thought that a communist system might help the suffering of the lower classes in the U.S. Historians suggest the President Franklin D. Roosevelt’s program of moderate liberal change may have averted more radical changes.

During the 1950s, many people were looking for more conservative political programs. Many were bewildered by the threats that the atomic bomb brought to their lives. Many were less tolerant of different political ideas. Many wanted to return to "the good old days."

For many, all of those fears and anxieties had one focus — the Red Menace, Russia. Communism threatened to bring economic, political, and social chaos to a people who longed for stability. This was not the first time the Red Menace had played on people’s fears. Right after the Russian Revolution in 1917, some leaders in the union movement had experimented with communism. There had been a backlash against communism then, and there was again during the 50s.

NEXT
McCarthyism & his Trip to Nebraska