NEXT
John Falter Painting for Victory 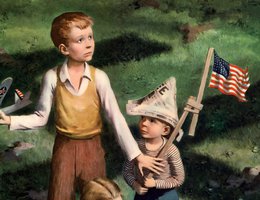 "Don’t Let That Shadow Touch Them" by Lawrence B. Smith, 1942; Produced for the U.S. Treasury
Courtesy National Archives and Records Administration, NWDNS-44-PA-97

"We were all the good guys. We did everything right and the Germans and the Japs, they looked awful and they sneered and they said lousy things. They were bad! It was really propaganda. I just accepted it. What else did I know?"
— Rose Marie Murphy Christensen, Columbus, grade school student.

Our propaganda often stereotyped the Italian, German, and Japanese enemies as evil characters. These portrayals dominated posters, movies, and even cartoons intended for children. 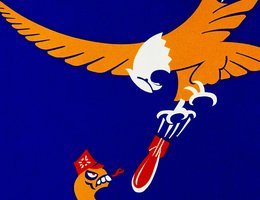 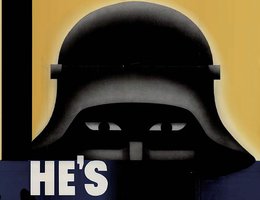 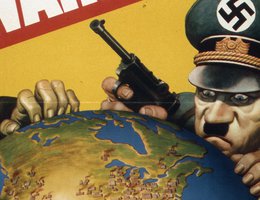 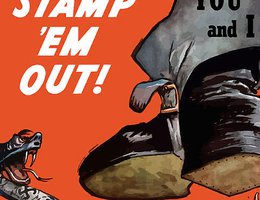 "We went to the movies all the time. You see them now on television, the same movies, and they are so blatantly propagandistic. Here was this little grinning guy again with the glasses and the buck teeth and the fur lined helmet. He was always in the cockpit. You were supposed to believe that there was somebody out on the wing shooting pictures of this guy in the cockpit while he was diving down."
— Barc Bayley, Lincoln, high school student.

Propaganda was used on the front lines as well as the home front. One of the more widespread uses of propaganda was in leaflets that were dropped on soldiers from the air. These leaflets were intended to demoralize the soldier so that he would lay down his arms and surrender. The United States, Germany, and Japan all used these leaflets.

NEXT
John Falter Painting for Victory