NEXT
What Does It Mean? 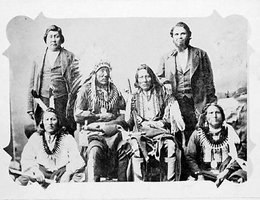 After a short trial, Judge Elmer Dundy issued a ruling that surprised many observers and caused comment across the country. The judge found that "an Indian is a person within the meaning of the law" and that Standing Bear was being held illegally. He issued a "writ of habeas corpus" — which is an "order to produce a body" or release someone held illegally. Here are the five key points of the ruling:

Within days of the decision, the Omaha Herald noted that "Judge Dundy’s decision in the Ponca case goes a thundering through the press and awakening the people to a new sense of its importance." The paper went on to quote from other newspapers from across the country.

The paper noted the "Many comments of eastern papers on Judge Dundy’s decision indicating that its effects upon tribes living under treaties on reservations ... were misunderstood." Apparently, the eastern papers were afraid that all Indians would be free to leave their reservations. The Cincinnati Gazette denounced the decision, calling it "impertinence." The Omaha paper went to great lengths to argue against those views.

But other papers, like the St. Louis Republican took up the cause:

"Now let the courts grapple with the great problem whether an Indian is a citizen or an alien. Since the abolition of slavery, all human beings except the Indians have been classed as one thing or the other. But as our Indian policy is executed, the Indians are sometimes both and sometimes neither. We make treaties with them as we do with foreign nations, and we rule them as if they were citizens, yet it is ridiculous to say they are both citizens and aliens".

For his part, Standing Bear reacted to the decision by going home. But before he left Omaha, he and his party went to the home of his attorney John Webster. The newspaper reported Standing Bear’s farewell:

"You and I are here. Our skins are of different color but God made us both. A little while ago when I was young I was wild. I knew nothing of the ways of the white people. I see you have a nice house here. I look at these beautiful rooms, I would like to have a house too, and it may be after a while that I can get one, but not so good a house as this. That is what I want to do." 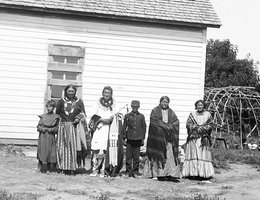 "For a great many years, a hundred years or more, the white men have been driving us about. They are shrewd, sharp and know how to cheat. But since I have been here I have found them different. They have all treated me different. They have all treated me very kindly. I am very thankful for it. Hitherto when we have been wronged we went to war. To assert our rights and avenge our wrongs we took the tomahawk. We had no law to punish those who did wrong, so we took our tomahawks and went to kill... “But you have found a better way. You have gone into court for us and I find our wrongs can be righted there. Now I have no more use for the tomahawk. I want to lay it down forever. (Here he stooped down, laid the tomahawk on the floor, and then stood erect and folded his arms.) I lay it down, I have no more use for it. I have found a better way."

NEXT
What Does It Mean?