PREVIOUS
The End of the Bison

NEXT
Railroads and Settlement 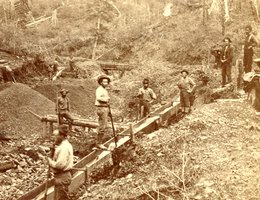 With the path wide open for cattle’s entry into Nebraska, three new markets for beef increased demand beyond the needs created by the Civil War.

There’s Gold in Them Thar Hills!

In 1874, Lieutenant Colonel George Armstrong Custer of the U.S. Cavalry emerged from an expedition into the Black Hills and announced that he had found gold there. Prospectors flooded into the area. 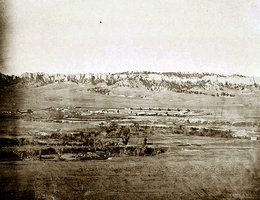 Towns sprang up around the swarm of miners with businessmen eager to help them spend their new-found wealth. These trespassers onto Native American land disrupted the fragile peace established between the United States government and the Arapaho, Cheyenne, and Lakota in the Treaty of 1868.

The Military Moves In

These tribes defended their land from the wave of invaders, resulting in a military response by the U.S. Soon a permanent military post, Fort Robinson, stood in Nebraska, just south of the Great Sioux Reservation. 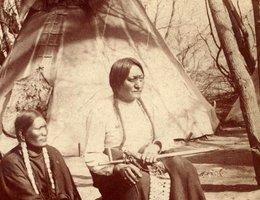 Military clashes in 1876 and 1877, along with the rapid decline of bison (Native Americans’ main food source), forced the tribes onto new, smaller reservations. This ended the free-ranging life that they had known, putting them under the control of the United States government.

With no natural meat resource left, the U.S. government had to supply cattle to the people on the reservations. Cow towns like Valentine, Rushville, Gordon, and Chadron burst onto the scene to meet that demand.

Now, nearly overnight, there were new demands for beef to feed hungry miners, the soldiers, and the Indians on the reservations.

Why were Native Americans on reservations?

Before living on reservations, where and how did they live?

How did their food supply change when they moved to a reservation?

Why was the change in food supply important? Was it simply about food?

What else was involved? 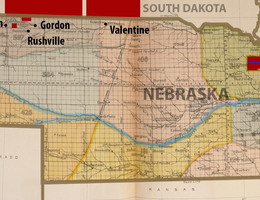 On the reservations, sugar, flour, coffee, bacon, dried beans, and other staples (often referred to as "domestic rations") were given to Native Americans. Sometimes, the government would provide live cattle at events called "beef issues". Herds of around 100 to 150 head of cattle were driven to the reservation agency where families would gather for the distribution.

Cattle would be turned loose on the prairie, and then chased by mounted hunters, much like the days of the bison hunts. When an animal had been killed, families would dress out the animals where they fell. The Indians would load the meat onto wagons where it was then dried for storage.

Read more about it: 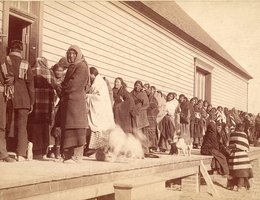 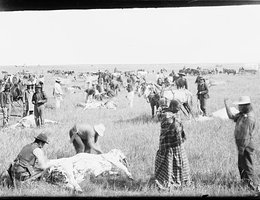 Chief Red Cloud traveled to Washington, D.C. to talk Congress into creating the Indian Agency later named for him. The Omaha Herald described one of these events on Sunday, September 19, 1875:

"About 3,000 mounted Indians surrounded the corral where the cattle were confined; as the names of the Indians were called out, the gate of the corral was swung open and the requisite number of beef were let loose, and then commenced a most savagely exciting scene that pen or picture could depict."

Read more about it:

as well as one from the

In later years, the “hunts” ended. With the large number of people, spooked animals, and shooting, the possibility of injury was great. Animals were simply killed in their corrals, and then hauled out where there was room to dress them. Beef issues continued into the 20th century.

By 1875, cattle had become a permanent part of Nebraska’s landscape. Some wanted them here, but some clearly did not. 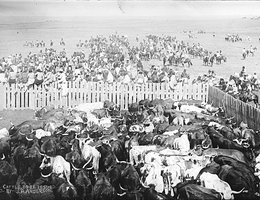 Find out more about the Beef Issue and its consequences. From the 2008 NET Television production Beef State

When the “beef issue” started and Native Americans were “hunting” cattle, how was it reported in the newspaper? Why was this news?

Were the opinions of Native Americans included in this article? Why or why not?

Were the opinions of the author included in this article? Why or why not?

Why is it important to look at the food supply of Native Americans on reservations?

Did they have control over the food they ate, how it was given to them, how much they could eat, etc.?

PREVIOUS
The End of the Bison

NEXT
Railroads and Settlement