NEXT
Landmarks and Gold Fever 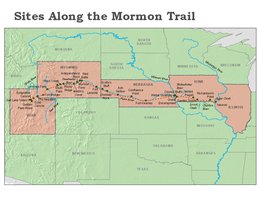 Mormon Trail Stops and Sites
By Dlm82 at English Wikipedia (Transferred from en.wikipedia to Commons.) [Public domain], via Wikimedia Commons

Religious freedom is a right guaranteed to Americans by the United States Constitution. However, some groups in history have been denied this right. Members of the Church of Jesus Christ of Latter-day-Saints (Mormons) were one of these groups. Mormon leader Brigham Young and his followers were forced to leave Nauvoo, Illinois. Young led the first migration of Mormons up the Platte River Valley in 1847 to what is now the state of Utah. They followed the Platte River on the north bank to avoid contact with the travelers on the busy Oregon Trail that followed the south bank of the river from near Kearney westward.

During the following two decades, thousands more gathered at Winter Quarters on the west bank of Missouri River near Florence (now part of northeast Omaha) before beginning the trek across the plains and mountains to their land of "Milk and Honey." 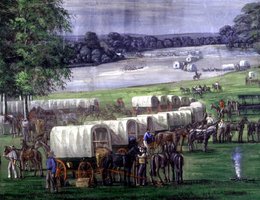 Pioneers Crossing the Plains of Nebraska. The Loup River was extremely difficult to cross due to the quicksand, swift current, and shifting sandbars.
Painted by Christensen, circa 1860. Courtesy Brigham Young University Museum of Art

The Mormon Winter Quarters on the west bank of the Missouri River near Florence (now part of northeast Omaha) was established under the direction of Brigham Young. It sheltered more than 3,000 people during the winter of 1846-47. It was a safe place in the wilderness for people who were fleeing from vengeful mobs. Unfortunately, they lived in log cabins, sod houses, and dugouts without enough food and supplies. When spring arrived, more than six hundred lay buried in the cemetery on the hill. Never giving up, a band of about five hundred Mormons left the Winter Quarters to cross the Plains to the Great Salt Lake Valley in Utah.

During the following two decades, thousands more gathered at Winter Quarters before beginning the trek across the plains and mountains to their land of "Milk and Honey." Some of the Mormon pioneers used handcarts in 1855 and in 1856. Although the carts were very inexpensive, pulling one was such backbreaking work that they stopped using them. The journey called for strength and courage, as well as faith. Hundreds of Mormon pioneers were buried along the trail, most in unmarked graves.

NEXT
Landmarks and Gold Fever