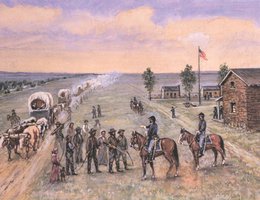 In 1844, pressure for more protection for additional whites was growing. The U.S. Secretary of War recommended that a chain of posts be built from the Missouri River to the Rocky Mountains to protect the Oregon migration. Col. Stephen Watts Kearny was ordered to construct a new fort and he chose a site on Table Creek, now Nebraska City. It would be named Fort Kearny.

The location of the fort in 1846 at Table Creek was a bad decision. The Table Creek site was not on the main route of overland traffic and few emigrants passed nearby. So the War Department ordered that a different fort should be built where the road to California met the Platte River.

In 1847, Lt. Daniel P. Woodbury, an officer in the Corps of Engineers, left Fort Kearny at Table Creek with about 70 men. When he got to the Platte, Woodbury described the site he chose in an official report:

"I have located the post opposite a group of wooded islands in the Platte River ... three hundred seventeen miles from Independence, Missouri, one hundred ninety-seven miles from Fort Kearny on the Missouri and three miles from the head of the group of islands called Grand Island."

Woodbury cited three advantages for the location of the fort: 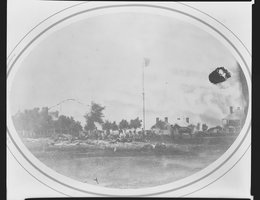 So, the second Fort Kearny was built in 1848 in present day Kearney County, where the various trails westward met. The fort was laid out in a square with buildings surrounding a parade ground of four acres. A flagstaff was placed in the center and cottonwood trees were planted around the parade ground.

Woodbury had given the name Fort Childs to the new post and headed his reports accordingly. The new post was named in honor of Col. Thomas Childs of Mexican War fame and he was also Woodbury’s father-in-law. But a general order from the War Department in December of 1848, stipulated that, "the new post established at Grand Island, Platte River, will be known as Fort Kearny." Thus, the name of the illustrious soldier, Stephen W. Kearny, was transferred to the Platte River post.

The fort was built on a widely used main branch of the Oregon Trail, and its most important function was helping travelers. It was the only fort between the Missouri River and the Rocky Mountains, and thousands of wagons camped there every summer. Some days over 500 ox teams passed the fort.

Fort Kearny was in the heart of the Indian country and could have been exposed to great danger from any fighting among the Indians. Still, the number of soldiers at Fort Kearny was usually not large, often around 500. Like Fort Atkinson, there was never a direct attack on the post, and there were never any major Indian fights in the area nearby. 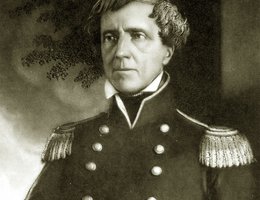 Fort Kearny (which was first named Fort Childs) was moved to the Platte River in 1848, and would become one of the most prominent manmade landmarks on the Oregon Trail. Yet, its beginnings were not auspicious. The few sod buildings and the small compliment of poorly equipped soldiers received only passing mention in early emigrant diaries and letters. The letters of Pvt. William Wilson Ingraham to his brother in Peoria, Illinois, are a rare exception, providing a word picture of life at both the original Fort Kearny on the Missouri River and new Fort Kearny on the Platte. Also, there are reports by Capt. Charles Frederick Ruff that describe conditions at the new fort when he took command of the installation late in 1848. 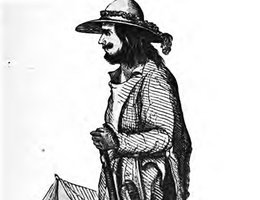 William Tappan was born on October 30, 1821, in Manchester, Massachusetts, home to four generations of his family. He spent six months with the Missouri Mounted Volunteers as the company’s civilian sketch artist. He chronicled life at Fort Kearney, making drawings and collections of plants, animals, people, and the geographic features of the area.

His diary begins in April of 1848. The unit was about to embark on its trip to the future site of the second Fort Kearney along the Platte. Tappan made reference to his sketches, as well as recording his experiences and interactions with soldiers, Native Americans, Mormons and others. He writes about plains vegetation, land formations, weather extremes, and animals, which undoubtedly were exotic to the New Englander.
In early October Tappan left Fort Childs. The diary ends during his return trip aboard an Ohio River Steamboat.

When William Ingraham enlisted in the Missouri Mounted Volunteers he had the mistaken notion that he would be sent to the Far West to "kill indians and hunt buffaloe." Instead his unit spent the winter of 1847 - 48 at the first Fort Kearny at present day Nebraska City, Nebraska. In the spring they traveled about 180 miles west to build Fort Childs on the Platte River.

Ingraham was born on July 24, 1826, to Harry E. and Content Wilson Ingraham in Kickapoo, Illinois. He died on June 9, 1888. In his letters Ingraham wrote about the possibility of going to Mexico, Oregon, or Missouri after he left the army. Whichever path he ultimately chose seems to have led to obscurity.

There is also a certain murkiness concerning his letters. Typed copies were given to the Nebraska State Historical Society by Virginius H. Chase, Ingraham’s grand-nephew, in the fall of 1955. It is clear from references in the existing correspondence between Chase and the Historical Society that other letters were lost or, more likely, that details of Ingraham’s life history had been discussed in conversations for which no notes were kept.

In the fall of 1848, the Missouri Volunteers were replaced by the regular army’s Mounted Rifleman, led by Captain Charles F. Ruff. Ruff’s reports to his commanding officer, Adjutant General, Roger Jones paint another picture of life at the fort.